“A fascist is one whose lust for money or power is combined with such an intensity of intolerance toward those of other races, parties, classes, religions, cultures, regions or nations as to make him ruthless in his use of deceit or violence to attain his ends”.

So said Henry Agard Wallace, the 33rd Vice President of the United States between 1941 and 1945. A man well placed to pass judgement on such matters, it appears to me.

I don’t suppose that Henry Agard Wallace ever visited rural Northamptonshire but if he did I’d wager that the village of Fotheringhay would have been up there on his “wish list”. This pretty village is the spiritual home of the House of York and then became infamous as the place of prolonged incarceration of Mary, Queen of Scots, ending in her demise.

It is hard to see how Fotheringhay could have been the scene for such brutality. Apparently when Mary first set eyes on her final destination she uttered the word “perio” in her carriage. This Latin word means “I am going to die” and is how Perio Mill Farm derives its name, sitting alongside the road to the village at what was the first terrifying vantage point.

When you visit the village now there is no castle. It was soon afterwards razed to the ground by Mary’s son, James I, save for a modest chunk of one of the walls. Now there is calm, unless the scouts are camping in the vicinity. Swans glide down the River Nene, and wedding bells peel frequently in the church of the House of York. King Richard III’s remains find themselves in Leicester to the annoyance of local historians.

The words of Mary Queen of Scots as she faced trial by 36 noblemen without legal counsel and access to the evidence in support of her prosecution. All but one convicted her.

We live in perilous times. Politicians in such times face their toughest test and the price of failure in rising to the test is invariably significant. It is believed that Elizabeth I never wanted Mary executed and she vacillated in signing the death warrant, but that hawkish political pressure caused her to perceive that she had no alternative.

The present peril lies in the combination of the motives for leaving the European Union and the means of securing that end. Wallace’s comment on fascism is enlightening as to where we find ourselves now. The enthusiasm with which the Leave campaign is prepared to exit on any terms is alarming. We all know about the deceit by which they took the country to the precipice upon which it now flounders. A deceit that started decades ago but recently has known no boundaries whatsoever. “Grass roots” has become a catch phrase of late. I fear that the grass roots we may be observing are weeds capable of overpowering the garden and even eating at the foundations of the castle.

My friend recently asked me why I was so worried. This is my response.

I once read a play by the Swiss playwright, Max Frisch, named Biedermann und die Brandstifter. The play premiered in 1958 and its English title was The Fire Raisers. In essence, the character Biedermann is conned by an affable stranger and allows the stranger into his attic at a time when reports of arson are rife. He is then further duped and lets another stranger in. The warning signs are obvious to all apart from Biedermann and his wife. The attic becomes a stockpile of inflammable material and Biedermann then watches as he effectively burns his own house down. 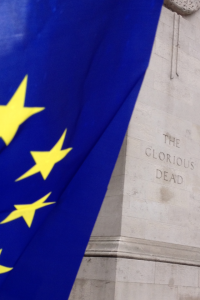 When I see loathsome Daily Express headlines fomenting intolerance towards our long standing partners and I perceive the lack of challenge from our politicians I am reminded of Biedermann, Mary, and the wise words of Wallace.

3 thoughts on “Fear and loathing in Fotheringhay”