In the depths of the gloom of the “B” word I decided to seek to look positively as to how I might cope with the prospect of being stripped of my freedom of movement across 28 countries.

There was an obvious lifestyle choice to be made involving departing Blighty altogether. I did give consideration to that.

I then toyed with obtaining a Polish passport. That particular course of action is still open to me, I believe.

In order to seize the moment of taking advantage and celebrating my threatened status I resolved to do some travelling around Europe; my Europe, while it still can so be called.

First of all we went on our summer holiday to Croatia and then I was fortunate enough to receive a gift from my wife of a September weekend in Nice. Conscious of the horrific event which occurred on the Promenade des Anglais in June I noted that she had booked us into the Radisson Blu, on the same street.

We had previously stayed in Nice en route to Corsica with the children when they were much younger and it was a city we always wanted to return to in the future.

Noted first of all: the excessively expensive cost of a taxi from the airport given the short distance to the hotel and the extra luggage charge raised by the driver.

The hotel was sufficiently comfortable with its own beach and pool that I am embarrassed to say we failed to leave it for 36 hours upon arrival, save for a trip to an 8 til late. The Promenade des Anglais is a truly fascinating boulevard. At one end, the Casino and at the other the Nice Côte d’Azur airport, an aeroplane park for private jets. More than ample to keep and hold your attention.

Beautiful people jog along this wide, palmed avenue. The coloured blinds shield the occupants of the flats from the still powerful sun. 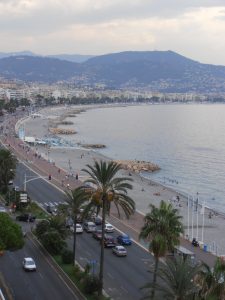 The architecture along the promenade is varied but the underlying theme is grandeur, rather like Brighton; this is a city where affluent English holidaymakers strolled along the seafront, hence its name. The pebbles here are light grey however, meaning that in plein soleil the water adopts a vibrant blue hue, making the Côte d’Azur.

Against the blue is the predominantly white background of the buildings along the front, interspersed with the odd piece of modern architecture, if that is what you wish to call it, our hotel included. 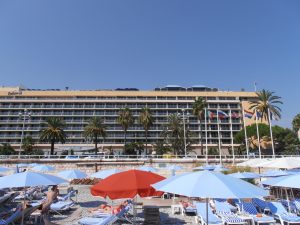 One of the numerous buses took us into old Nice and the feel is Italian there. Narrow streets emerge into piazzas where parasols shade diners and drinkers from the afternoon sun. Whilst the food at the hotel had been good this was now an opportunity to sample something really niçoise and there is no better way to do so than by ordering a salade niçoise, moules frites or pissaladière. The latter is the subject of some controversy in these parts, it being rumoured that the pissaladière was the first pizza, before its concept was then adopted by the Italians who lay claim to it being their creation, having put cheese on top of the tomato base originally decorated only with black olives and anchovies. 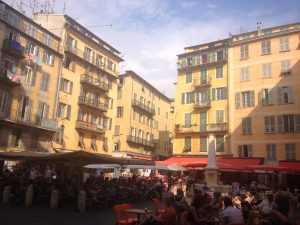 It was time to return and make departure plans. In order to walk off the impressive €15,90 set meal we decided to take in the entire avenue along its course. Old Nice with its bustle and narrowness was gone; as if we had emerged from a funnel. Everything was wide again, big. I had plain forgotten where we were as I gazed out to the Mediterranean and suddenly it was there.

The noise of a sobbing lady caught my attention. I had a feeling that she probably goes there everyday day. She didn’t look like a stranger here. There are candles but most of all, cuddly toys. There’s a bear with the year 2000 printed on it. 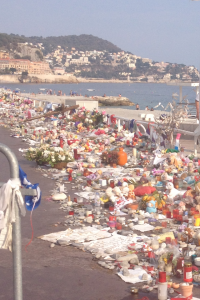 Having stopped for a crêpe we had enjoyed our sweet and now this was the bitter, the really bitter indeed.

There is nothing you can meaningfully say to each other when faced with this.

We headed back for the airport and post-“B” word Britain. We had gone over our own as well as the footsteps of English holiday travellers for centuries. This time, it was different however. Just as sweet but with a markedly more bitter after taste.