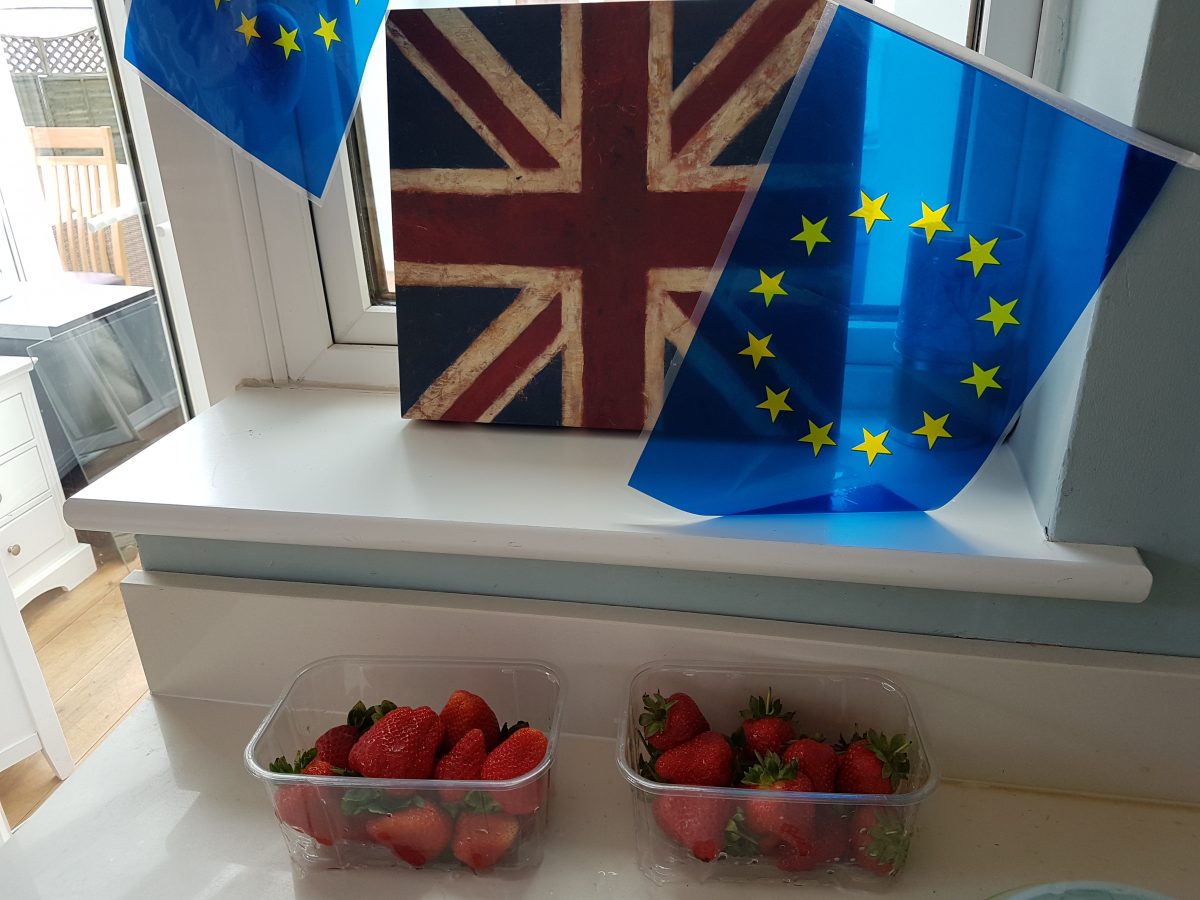 . Jean-Claude Juncker is less than impressed and Michel Barnier keeps looking at his watch and pointing out the “tick, tock”.

Jacob Rees-Mogg refuses to accept that Brexit is a “shambles” although shows off to Jon Snow that his superior education dictates that he knows what a shambles really means.

Its archaic meaning, favoured by Rees-Mogg is “a butcher’s slaughterhouse”.

A more contemporary “state of total disorder” is most probably what many others see first, Snow included.

Redwood and Bone do not acknowledge any need to meet a divorce settlement, happy to see us crashing out of the single market on WTO terms.

Fox remains low-lying off the right hand side of the radar.

Johnson now fights for his own reputation and is openly attacked by sections of the press, but lines up behind May in her desire to see the job through to 2022.

One could be forgiven for wondering if the country is suffering from a bout of debilitating collective mental illness. Sterling has crashed to near all-time lows, inflation is rising and businesses are making contingency plans to relocate staff. Some other businesses have already closed. The housing market has the lowest level of new sale instructions since 2002. Talented people are leaving in droves, both UK and non-UK EU citizens. Yet, the B-word is right down the list. BBC Breakfast reports a crashing sterling but the presenter feels constrained to remark that it could go up (has she seen the graph since the referendum was announced?). No. It’s the Euro being “too strong”. Naughty Euro.

Which collective illness(es) might the country be suffering from? Are there underlying issues affecting the state of the nation’s collective health?

The key to a collective national understanding might be in some of the language of the leaders of the country’s presently emerging destiny and some of those who support and follow it.

“You do not have to buy German or French cars.

“It will be a choice between strong and stable leadership in the national interest, with me as your prime minister, or weak and unstable coalition government…” Theresa May, April 2017 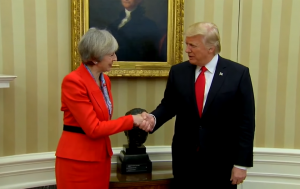 “It was with reluctance that I decided the country needs this election, but it is with strong conviction that I say it is necessary to secure the strong and stable leadership the country needs…” Theresa May, April 2017

iii) a propensity to deny weakness

“Britain is and always will be a great European power, offering top-table opinions and giving leadership on everything…” Boris Johnson, June 2016

iv) a propensity to make intimidating demands of entitlement

“I think it’s legitimate to say that if people feel they have lost control completely, and we have lost control of our borders completely as members of the EU, and if people feel that voting doesn’t change anything then violence is the next step. I find it difficult to contemplate it happening here, but nothing’s impossible.” Nigel Farage – May 2016

v) a propensity to displays of anger due to unmet expectations

“I now fear that every attempt will be made to block or delay the triggering of Article 50. If this is so, they have no idea of the public anger that they will provoke”. Nigel Farage – November 2016

vi) a propensity to devalue people who threaten self-esteem

“The people of this country have had enough of experts from organisations with acronyms, saying that they know what is best, and getting it consistently wrong.” Michael Gove, June 2016

vii) A lack of awareness of the objective difference between their expectations and reality, as well as the impact this may be having on their relationships

“At home and abroad, the negative consequences are being wildly overdone, and the upside is being ignored. The stock market is way above its level of last autumn; the pound remains higher than it was in 2013 and 2014.” Boris Johnson, June 2016

“We are not out to undermine the many friendly and positive collaborations and friendships UK people and companies share with the continent.” John Redwood, May 2017

“I believe that millions of people who voted Leave were also inspired by the belief that Britain is a great country, and that outside the job-destroying coils of EU bureaucracy we can survive and thrive as never before” Boris Johnson, June 2016

“This is like the jailer has accidentally leftthe door of the jail open and people can see the sunlit land beyond…” Boris Johnson, March 2016

“That is the glorious joy of free trade – it is not a zero-sum game, it really can be win-win.” Liam Fox, September 2016

So, that’s of some of the words of the collective drivers of “policy”, maybe. What about those driven by and with it?

Comments made in bold red italic below are those found on Mail Online from contributors; grammar, spelling and typographical errors included verbatim. 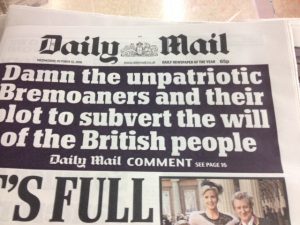 According to psychiatrist Neel Burton writing in Psychology Today [1] a Dependent Personality Disorder (DPD) is characterised:-

“…by a lack of self-confidence and an excessive need to be looked after. The person needs a lot of help in making everyday decisions and surrenders important life decisions to the care of others. He greatly fears abandonment and may go through considerable lengths to secure and maintain relationships.

A person with DPD sees himself as inadequate and helpless, and so surrenders personal responsibility and submits himself to one or more protective others.

“walk away now. I dont (sic.) want free movement or a trade deal. However we need to guarentee (sic.) that us brits with holiday homes abroad have free movement. just get it sorted.”

“I wonder just how many in that march (for Europe)are home born?”

…whom he idealises as competent and powerful…

“Such arrogance from a Frog (Michel Barnier), give them absolutely nothing…the big exporters of Europe would soon put him in his place. So would Nigel Farage.”

“Try out the water cannons which Boris purchased”

…and towards whom he behaves in a manner that is ingratiating and self-effacing.

People with DPD often end up with people with a cluster B personality disorder, who feed on the unconditional high regard in which they are held. Overall, people with DPD maintain a naïve and child-like perspective…

“Most of them (March for Europe participants) need a wash  …the very type of person we don’t need in this country i.e. a migrant”

“The great unwashed – You can smell the hemp and urine from here.” 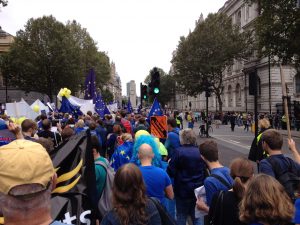 …and have limited insight into themselves and others.

“I think you should shut the hell up snowflake”

“…all the wrongs in Britain today: foreigners doing as they wish”

“A frog who thinks he can teach us about life ! Or is he just a toad in a hole ?”

This entrenches their dependency, and leaves them vulnerable to abuse and exploitation.”

Of course you cannot find a pigeon-hole into which a “will of the people” definitively fits. Illness, or no illness. Personality disorder with, or without. Moods shift and so do percentages when looking at a collective diagnosis. Those presently in line with and driven by “policy” might not find the policy-makers quite so competent and powerful as events unfold. In turn they may acquire and develop a level of different insight. The policy-makers might then find themselves no longer the objects of such unconditional high regard. Even on the Mail Online Comments pages there is emerging evidence of those who are beginning to see a shambles for more than a butcher’s slaughterhouse.

Disclaimer and clarification: nothing in this article is to be construed as an attempted psychological diagnosis of the personality of an individual quoted, neither as a suggestion that they are personally suffering from any of the personality disorders referred to. The purpose and aim of the article is to look at a perceived collective national dysfunction.