Cocooned in a holiday village the opportunities of further observing Britain’s position in the world are endless.

The same-day copies of the Daily Mail and the Telegraph sit awaiting collection at the shop. The two biggest media sources of misinformation about the European Union according to the Union’s department set up in the 1990’s to investigate such matters. Not an ounce (as opposed to a gram) of shame about it.

Have you got my copy of the Mail? The Mail.

If, of course, this was another village serving an exclusively German clientèle it would be labelled too German.

Happy hours have become doubly happy lasting 120 minutes both in and on the periphery of the village.

A ball in the form of a globe has been left by the pool. A small ball. So small indeed that the word Great cannot be shown in all its glory because there isn’t enough room.

The geo-political sphere now for the British involves posed portraits; the hands of May and Trump. Gove at Trump Towers with Murdoch hiding in the background like a child playing hide-and-seek with the rest of the world. May signing the Article 50 letter with the now obligatory Union Jack next to her like a Lord Protector. Fox grinning next to Duterte in the Philippines.

There is a sheer and winding road leading up to an altitude of 900 metres or so across the rugged mountains. A feat of engineering undertaken maybe a hundred years previously, perhaps more. An altitude on parity with the very peak of England’s highest mountain, let alone a road going anywhere near it. 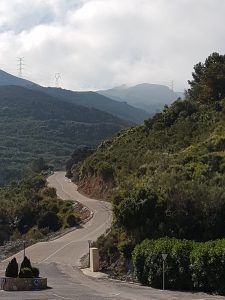 One of the drawers in a wardrobe has collapsed and a complaint ensues. Shoddy Spanish workmanship to blame, it appears. Despite their best efforts and road building prowess they still lack a bit of that je ne sais quoi which continues to set the British apart, and above. An effortless and noticeably pothole-free glide down the autopista has still not bridged the gulf that divides the British from their struggling neighbours. The evidence is elsewhere, in the flat pack furniture. Although the electrics are admittedly better than they used to be.

The community of British migrants living in the vicinity is considerable. The butcher readily knows that mince is what is being pointed to by the Anglophone who wishes to make burgers.

Upon re-entry to the United Kingdom the shuttle train to the terminal is not operating but nobody has forewarned the passengers arriving and crowding the escalators. A man picks up the red emergency telephone. An announcement is made; although it is difficult to distinguish the fact that it is only made in a version of the mother tongue because the public address system is so faint as to be practically useless. Arriving tourists look utterly baffled as travellers clamber up escalators which are designed to descend until a lady arrives, with an inadequate voice for purpose, appealing for calm. The audience is not impressed.

“This is a fiasco. I’ve got two young kids. Welcome to the UK. It would never happen in Spain, love..”

2 thoughts on “A Postcard from the Edge”